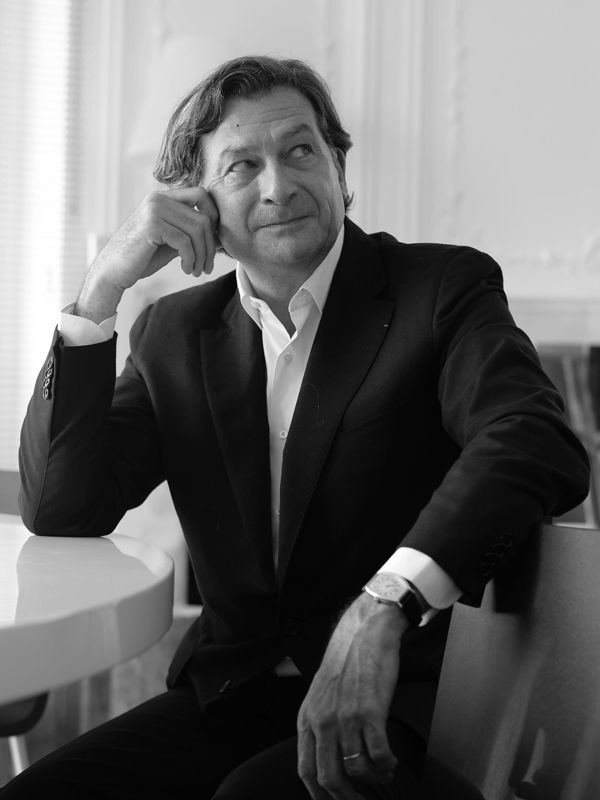 Bruno Moinard, architect/scenographer who’s reputation is well established, asserts himself through the elegance and pureness of his conceptions, elaborated to the last minute detail. He is a man everybody seems to equally appreciate for his professional rigor and for his sympathetic approach

Following his graduation from the Ecole Nationale Supérieure des Arts Appliqués et des Métiers d’Art and a first experience with Hubert Cornier on a project for the famous restaurant Troisgros of Roanne, Bruno Moinard’s talent as a designer led to his integration in 1979 within Adreé Putman’s and Jean-François Bodin’s team in the context of Ecart and Ecart International. An adventure which lasted fifteen years during which he became Andrée Putman’s senior collaborator and permitted him to namely participate in one of the most memorable projects: the mythical Concorde airplane. During this period, he elaborated boutique designs and graphic charts (Thierry Mugler in Paris, Yves Saint Laurent in the USA and Karl Lagerfield in France as well as on a worldwide basis), hotel designs (Morgan’s at New York, Le Lac in Tokyo, Roissy Airport Sheraton and Saint James Club in Paris, Im Wasserturm in Cologne), restaurant designs (Café Français at the New York’s MOMA, Opium in Tokyo, Orchid in Kobé) office interiors (Editions du Regard, Culture Minister Jack Lang, Arche de la Défense, La 7 Arte, Air France etc.) design for museums, foundations, exhibitions and many private homes - apartments and townhouses (Karl Lagerfeld, Jean-Paul Goude, Pierre Boulez…) In collaboration with Philippe Stark, he even participated in the decoration of President François Mitterand’s Elysée apartment.

From 1985 to 1995 he was responsible for Ecart’s research and design department comprising a team of fifteen persons. However, his aspiration was to found his own agency which he achieved in 1995 under the name 4BI. The architect explains “I took this opportunity for a new start at that time in order to express my creativity using my own name”; following the many years of experience acquired over a wide range of projects, he continued henceforth on his path with his innate maturity and the strength of his convictions.

From the start he worked for demanding but rewarding clients, such as the Fondation Cartier which entrusted him with the design and lay out of some of their exhibitions, which, he explains “was the commencement of a long collaboration with Cartier in France and on a worldwide basis lasting until today and projected into the future.” Since 2002 he even conceives and designs the new worldwide Cartier boutique concept involving 220 locations to be accommodated with like radiance.

In 2003 Bruno Moinard received the Janus prize for the design of the new Cartier concept. Then, during the “Sommet du Luxe et de la Création” held in Paris in November 2004, he was discerned the “Talent de l’Elegance”.

Bruno Moinard’s vision and his aptitude to reconcile while highlighting tradition and modernity draw the attention of other important actors of the luxury field. In 2002, François Pinault entrusts him with the interior design of the wine-making plant and cellar of Chateau Latour in the Bordeaux region

This already busy career is supplemented with other achievements significant for their specific theme or their global approach. One can cite the Roland Garros Tennis Museum baptized the Museum Tenniseum, inaugurated in 2003, the refurbishment of the Musée des Arts Décoratifs in Paris, the implementation of the Kiora restaurant in Tokyo or, on the other hand, the creation of the furniture collection named Blanche for the HA2 in Japan.

One cannot evoke Bruno Moinard without referring to his strong ties with the culture of l’Empire des Signes as expressed by Roland Barthes, founded on the use of symbols, rituals and, at the same time, the sacred and eternity. As a matter of fact, there is a Japanese influence on this French architect felt by the decisiveness of the calligraphic stroke used for his designs, as well as the simplicity and purity of the lines, while searching to reflect the “soul” present in each object or location, in order to draw out the profound and discreet beauty in perfect harmony with time flowing past.